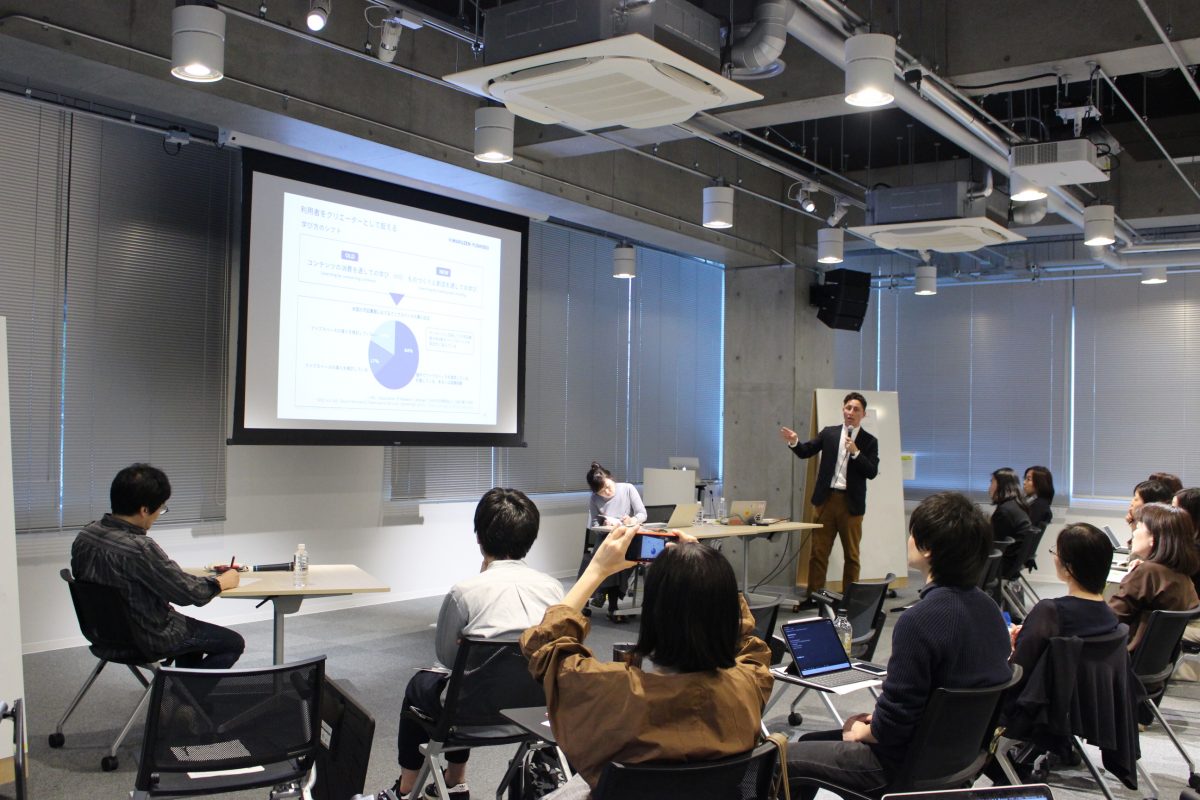 We invited Ms Fumiko Ichikawa from Re:Public Inc. and Mr Takahisa Masui from Maruzen-Yushodo Co., Ltd, to speak on the theme of “Designing a Design Library”. The venue was packed with approximately 40 listeners. Professor Toru Koga from Faculty of Design tells us about it.

The Designing a Design Library theme has the potential to transform the way we think about knowledge. Knowledge has been redefined, and is no longer quietly acquiring pre-existing information; it is now something that is born within creative processes, and is only useful when it is in support of creativity.
Socrates said that knowledge is only what aims “not to live, but to live well”; For Mr Masui, knowledge is nurtured by the process of creative making. Therefore, to acquire knowledge is always by “Creative Learning”. Knowledge is one with production (autopoiesis). Modern libraries have fab spaces, archives, and exhibits; this is part of the unity between knowledge and action. Which means that knowledge is not something hidden within books, but within the actions taken by the human body, in other words, it only exists within the movements involved in living, creating, and speaking. Libraries need to function as a collection of active bodies, meaning that libraries do not consist of books, but of people.
Mr. Masui discussed three areas revolving around people and things, from within the increasing domain of modern design. The first is the maker space, a place for substantive crafts by hands and bodies, and second is the hacker space, for computer programming, and the third is an area to bring the first two together. Fab spaces are all of these three areas brought together, making them primary domains for action in design.
The purpose of the areas is in exhibition; they are meant to be seen by, and influence others. The knowledge that their works and creations will be seen by others provides a lot of motivation for students and teachers, Mr. Masui states. He says it is because the creative efforts are no longer private, but public. According to the 20th century philosopher, Hannah Arendt, “action” is called such because it is conducted in a place where people gather, with the knowledge that it will be seen by others.
For this reason, Mrs. Ichikawa has added cities to the three areas. If each individual strives to live well, their actions will necessarily affect others living with their city (polis). She introduced the efforts of Barcelona in creating Superblocks, where automobiles have been eliminated from city space. Within these, the space freed by blocking out automobiles is passed on to people to create children’s playgrounds, flea markets, and outdoor cinemas. Even is a design experiences a setback, the next person picks it up, and there is not end to its unpredictable process. By passing things along like this, Mrs. Ichikawa says, the efforts of individuals trying to live well comes together to form a public imagination.
In this way, citizens moving to live well brings design towards politics. According to Mrs. Ichikawa, this process is not for the purpose of realizing a certain specific goal. The people who live there begin to recognize it as their home ground as they continue to try new things and experiments in safety, which brings about an “Able City”; the goal is to fall in love with the area you live in.
Which means that it is the duty of libraries in cities to support creative attempts in design, record the process of their successes and failures, prepare for the next attempts; it is to support the chain of imagination inciting imagination. Libraries themselves are passed down through a variety of people, and is its own creative endeavor. At the Kyushu University The Kyushu University Faculty of Design is working on the fundamentals of design studies to systematize design.

[Speakers]
Fumiko Ichikawa
Co-Founded of Re:Public Inc.
She graduated from Keio University Graduate School. She worked for Nokia as a UX expert for about 10 years in the design and directing product development. Then she left to join Hakuhodo Innovation Lab before co-founding Re:Public Inc. Her expertise is in research and practice of innovation ecosystem based on the abundant research experience she has gathered.

Takahisa Masui
Maruo Matsudo Co., Ltd.
Research & Innovation Headquarters
Solution Development Department.
He graduated from the University of Chicago. After graduating, he engaged in digital archive product development in Japan. Currently, he is working on building a learning space that supports library users or learners as creators of information, especially in fab spaces.

Prev The 10th Design Fundamental Seminar: The Graduate School of Human-Environment Studies Multi-disciplinary Program (Play and Refinement) - “Design of Perspective - Do you see the world as it really is?” Next The 1st Design x Business x Entrepreneurship Seminar: “Creating value worth more than ¥1,000 for a strawberry"
閉じる
閉じる
閉じる