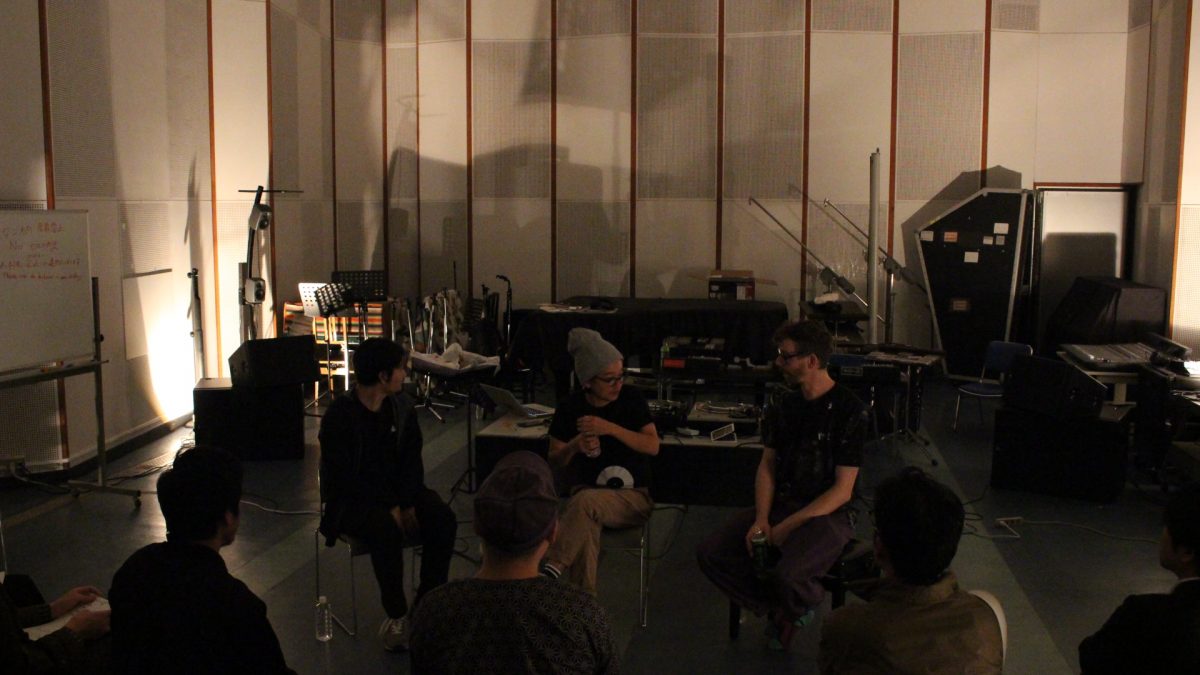 The 3rd Design Seminar Next : The Behavior of Sound Borne From “Music Without A Starting Point” 2019 - Don't DJ/YPY Yukemuri Gokudo Tsua

The 3rd Design Seminar NEXT – The action of sound from “music without a starting point” 2019 by Don’t DJ/YPY Yukemuri Gokudo tsua 2019″ was held on October 28, 2019, in the Kyushu University Ohashi Campus, Acoustics Research Center, Recording Studio. We welcomed special guests Don’t DJ, a musician residing in Berlin who was once also an exchange student at the Faculty of Design in our university. Also, YPY, a solo project by Koshiro Hino who is the player & composer for the band “goat and bonanzas”.

There were three performances. We have Associate Professor Jo from our faculty performing with self-made records using paper and acrylic, followed by YPY who used three multi-track tape recorders and a vast number of cassette tapes. Don’t DJ, who combined turntables made into musical instruments with various objects (e.g., rubber bands, CDs) and sounds played from a computer. After the performance concluded, Associate Professor Jo served as the moderator and discussed with the guests on the meaning of the theme “music without a starting point” in their music. They talked about the composition of each performance, the equipment used, discussions that do not appear in regular live performances and talk events.

There were about 50 attendees from the university and the general public. There were many views shared from the performers in this dialogue session which aimed to explore new possibilities for design through practice. Below are the reviews from four of the university’s students who supported in preparation, the event itself and cleaning up at the end.

Juppo Yokogawa (2nd Year Master)
While bearing the keyword of design, we recognize that Design Seminar NEXT is a place where you can listen to the stories of guests who don’t fit in the framework of a designer. This time, I was able to experience performances by artists under the theme of “music without a starting point.” As I listened to them, while the guests Don’t DJ and YPY are both artists, I felt that they could also be referred to as designers of alternative music systems. The talks by the guests were an important factor that increased the depth of this event. As a student, I don’t often have contact with people from outside of the university. This event was an enlightening experience as not only could we directly hear from the artists themselves on their thoughts and backgrounds. It was exciting to know that there are people who live their lives differently. In this respect, I feel that it could be better if there were more time given for the talk/discussion session. Also, I would have liked to hear more about the relationship between the two guests. While I am grateful that Design Seminar NEXT has been an experience that has allowed me to broaden my outlook, I wish I could have made more use of such opportunity as an undergraduate student. If I ever have the chance to support this event again, I would like it more accessible for more students to attend.
Lee Sun Kyu (Research Student)
The title was difficult to understand initially, but I got it after attending the event. I felt as though it was not limited to just music, and it was fun to hear. I like to make drum beats myself, so it was so comforting to hear so many beats. The approach to playing each of the instruments and the sounds that came from them was unique. The artist’s individuality could be felt strongly from the setting and the music. I am glad I could see them from so close up. Ideally, it will be great if there are interactions with the artists and they can explain the setting before the performance. This great opportunity had made me want to improve my Japanese listening ability.
Shunichiro Nakauchi (4th Year Undergraduate)
When you think of music, you think of something that has a rhythm and a melody. There is a context of lyrics, tonality, beats that string the music together where it is performed and heard as one piece of music. Unlike ambient music, the audience has a dual relationship with the performer. To me, “without a starting point” felt as if it meant that there was no beat or melody. While a rhythm normally goes something like 1, 2, 3, 4/1, 2, 3, 4, where there is a starting point of 1, instead there are multiple rhythms at once, and there is no clear starting point. However, it may be difficult to understand without hearing it for yourself.
It is also noteworthy that there were answers from the artists during the talk sessions. I felt some connection between the styles of PCJ, cassettes and records. It would have been nice if there was a place to listen to music after listening to the talk.
Kiyu Nishida (4th Year Undergraduate)
My first impression was amazement that we could actually have events like this in design. I also like to try making music with substance, so this was really fun to watch. I think it was great that this event included the dialogue session as we were able to find out more about what the artists were actually trying to do. I did think that the talks could have been longer. There is a lot that we could talk about. I also wanted to try it too! When I studied abroad in Germany, there were events like this once a week where the students were exploring the possibilities of various music experimentally from the same perspective as artists. There were times that the students were called artists. That was fun to watch and added to the highlights of the event. There were many parts where I felt that I would love to do this myself. “Could we do this in design?” I wondered.
［Speaker］
Don’t DJ
An individualist artist who keeps a prominent presence through polyrhythm works based on Euclidean rhythm. The “music without a starting point” that he calls “musik akifare” is realized by a combination of extremely minimally repeating rhythm patterns. As you continue listening to the relentless (but superb) repetition, it becomes ambiguous where the origin of the loop is, so that different patterns are perceived in your consciousness by each listener.

YPY
Koshiro Hino’s solo project. He is a player and composer for the bands’ Goat and Bonanzas and the large hybrid project “Virginal Variations”. “Virginal Variations” fuses classical instruments with electronic sounds and the whole-body auditory live performance “GEIST” which combines many speakers with moving performers. He is also active in the ANTIBODIES collective which was founded by Yoko Higashino, and contributes music to the taiko drumming group “Kodo”.