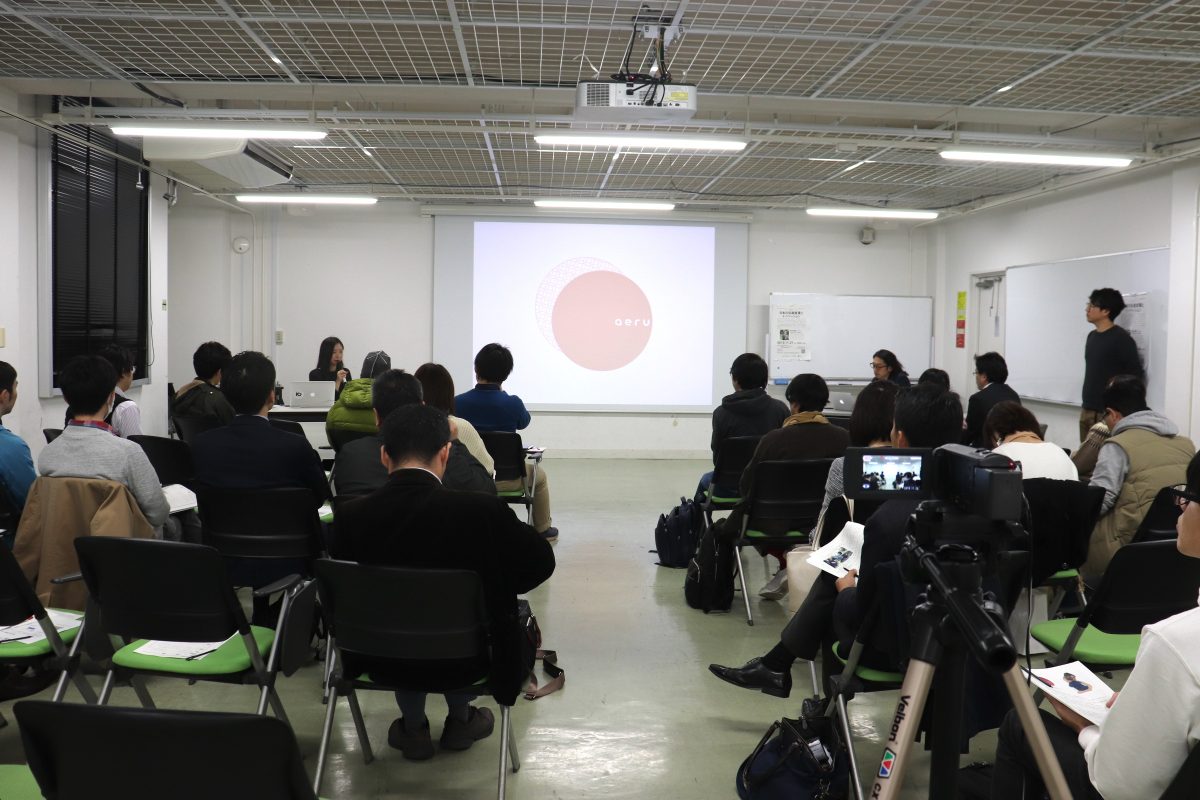 Kyushu University Faculty of Design, Business School (QBS), and Robert T. Huang Entrepreneurship Center (QREC) organized the 3rd Seminar of Design x Business x Entrepreneurship. We invited Ms Rika Yajima, founder and representative director of Aeru Company, to speak on the theme of “Traditional Business and Innovation in Japan” in the 2nd Design X Business X Entrepreneurship Seminar. The event was a success with about 30 participants from inside and outside the school. Associate Professor Satoru Tokuhisa of Faculty of Design at Kyushu University reports on the event below.

I will give an excerpt based on what impressed me from her 90-minute lecture, which, in addition to the story of the founding of Aeru, focused on things such as the way the company ought to be, its business developments, and its management policies.

In the question and answer session, there were many questions asked. There were questions on the nature of high cost for raw materials which is an issue in traditional crafts. What are the solutions? How to publicize traditional crafts to a generation with no interest in them? Also, how Ms Yajima achieve Design X Business X Entrepreneurship? It was an engaging seminar overflowing with enthusiasm, a wide array of questions, and many participants continued the discussion, even after the ending of the event.

Yajima Rika
She was born in Tokyo in 1988. She graduated from the Keio University Faculty of Law, Graduate School of Media and Governance. Attracted by the charm of craftsmen and traditions, she began travelling around the country from the age of 19 and transmitting information of Japan’s traditional culture in the university. With the thought of “wanting to connect Japan’s traditions to the next generation,” she founded Aeru Company in March of 2011, during her fourth year in the university. In March of 2012, to create an environment in which children can experience the work of artisans from a young age, launched “Traditions-from-the-Age-of-Zero Brand, Aeru,” produced original products along with artisans all over Japan, and started a directly-managed online store. In 2014, she opened a business unit in Tokyo, “Aeru Meguro,” and in 2015, “Aeru Gojo,” in Kyoto. She was featured in “The Dawn of Gaia” (TV Tokyo).
Currently, she is developing a variety of business to connect the next generation to the traditions of Japan, and the wisdom of their predecessors. She is a member of the World Economic Forum (Davos Conference) “World Economic Forum – Global Shapers Community.” In 2015, she won the Women Entrepreneurs Grand Prize in the 4th Development Bank of Japan (DBJ) “New Business Plan Competition for Women Entrepreneurs.” In 2017, she won two awards in the second “APEC Best Award” – the APEC Best Award Grand Prize and the Best Social Impact Award. She also won the Kyoto City Culture and Arts Industry Tourism Awards “Kirameki Grand Prize.”
She authored “Aeru -aeru- dentō sangyō wo kodomo ni tsunagu 25 sai josei kigyōka” (Aeru -aeru- A 25-year-old female entrepreneur connects children with traditional industries) by Hayakawa Publishing, “Yarigai kara kangaeru jibunrashii hatarakikata” (How to work like oneself, starting with thinking about what is worthwhile) by Kino Books, and three other volumes.

Prev Nanocellulose×Earth ~ Shaping nanocellulose into vessels~ Experimental Report 2 "Can earth that is mixed with nanocellulose retain water?" Next The 3rd Design x Business x Entrepreneurship Seminar: The "Evolutionary Thinking" to Realize Social Issues (WHY) and Innovation (HOW)
閉じる
閉じる