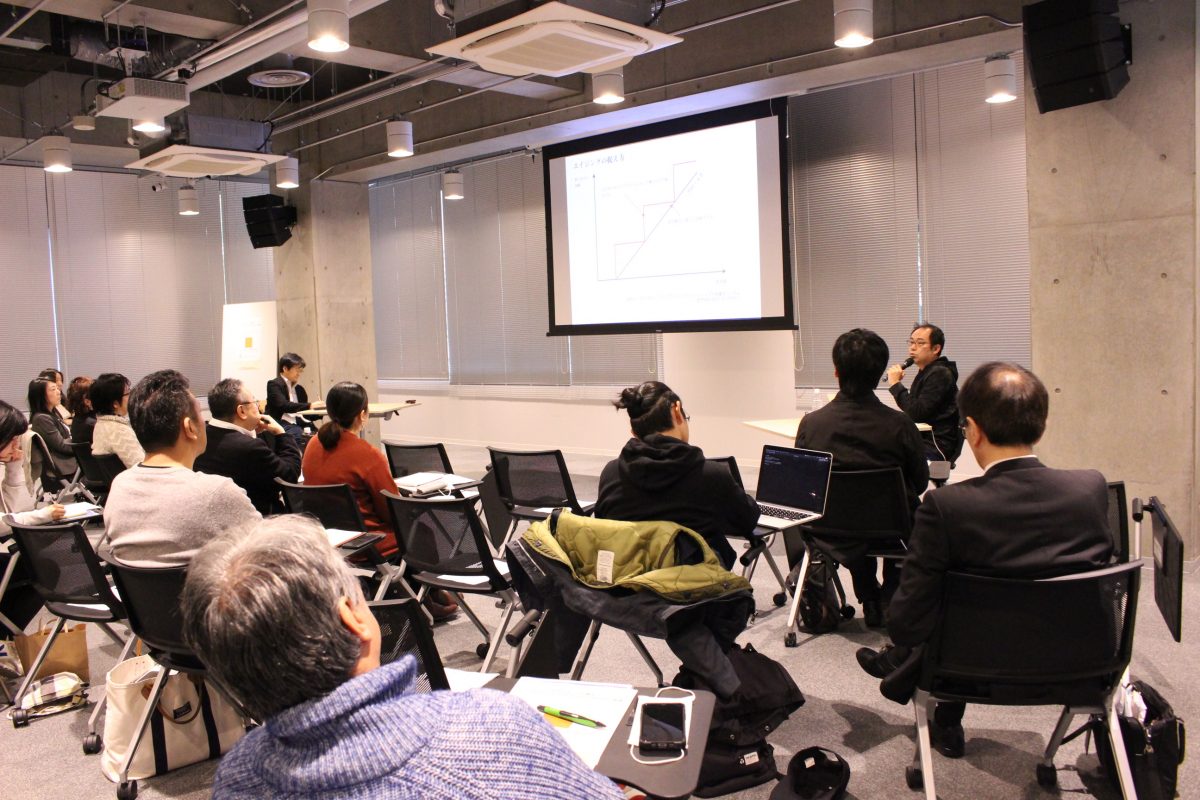 The 12th Design Fundamental Seminar: What is a Designer? Principles of Design, Considered from the Angle of “Professionalism”

The Kyushu University Faculty of Design is working on the fundamentals of design studies to systematizing design. We have invited Mr Dai Tamura of Re-Public Inc shared with us in the 12th Design Fundamental Seminar on, “What is a Designer? Principles of Design, Considered from the Angle of “Professionalism”. The seminar was a great success, attracting more than fifty participants. Professor Toru Koga of the Graduate School of Design will tell us more about the day.

What does designer professionalism mean in the age of the advance of digitalization, when designers are threatened both by amateurs and AI? In response to the question of how to keep designers alive, Mr Tamura claims that the traditional image of professionals as specialists, artisans and the elite no longer applies.

Nowadays, the pros are people who “rewrite classifications”, rather than specialists. Cars, which evolved from carriages, and Kei cars, which were developed based originally on bicycles, are now seen as similar. But due to the differences in their history, manufacturers and systems continue to be stuck in their respective frameworks. Professionals are the ones who break down the walls of specialist “silos” and constantly create new domains.

Today’s pros aren’t artisans; they’re people who “rewrite relationships between people and things”. Modern manufacturing has diverged from globally-inspired creations based on ideas and data, and locally-rooted recycling-based production. In this day and age, we have to review personalized craftsmanship that puts the soul into things. Pros take it upon themselves to do that and thus reinvent the traditional relationships between things and people.

Today’s pros aren’t the elite; they’re people who “create their own place to be”. Formal education and corporations create a shrewd elite who behave rationally, but there is no innovation. Instead, real pros organize relationships that activate people’s untapped talent by “opening up individuality, and opening the door to change”.

Certainly, the future of designers does not lie in the direction of facing the threat of amateurs and AI by enhancing existing skills in the same playing field. It is because the zero-sum game to compete with amateurs will increasingly take away from ordinary people the ability to make something, and above all, designers would eventually lose this competition.

Instead, as Mr Tamura puts it, the professional abilities of designers seem to be the ability to support ordinary people’s design, free people from a fixed way of thinking and enabled them to reinvent. However, perhaps these are abilities which ordinary people should be taking up too.

If so, designers are doomed to disappear as professionals. We will be betting our final professionalism on the beauty of that disappearance. Mr Tamura claimed that the designer as “a 21st Century revolutionary who breaks new ground on the frontiers, ploughs with their own hands and gains independence” is a stance that the ordinary person of the future should have. William Morris was also hoping for designers to take the role as avant-garde to serve such a “revolution”.

At Kyushu University Faculty of Design, on the fundamentals of design studies to systematize design.

[Presenter]
Hiroshi Tamura
Co-founder of Re-Public Inc. Visiting Professor at Kyushu University. Recognized internationally as a leader in design thinking and business ethnography. Engaged in research and practice about designing environments which continuously foster innovation, which spans the globe and across the public, private and tertiary sectors.