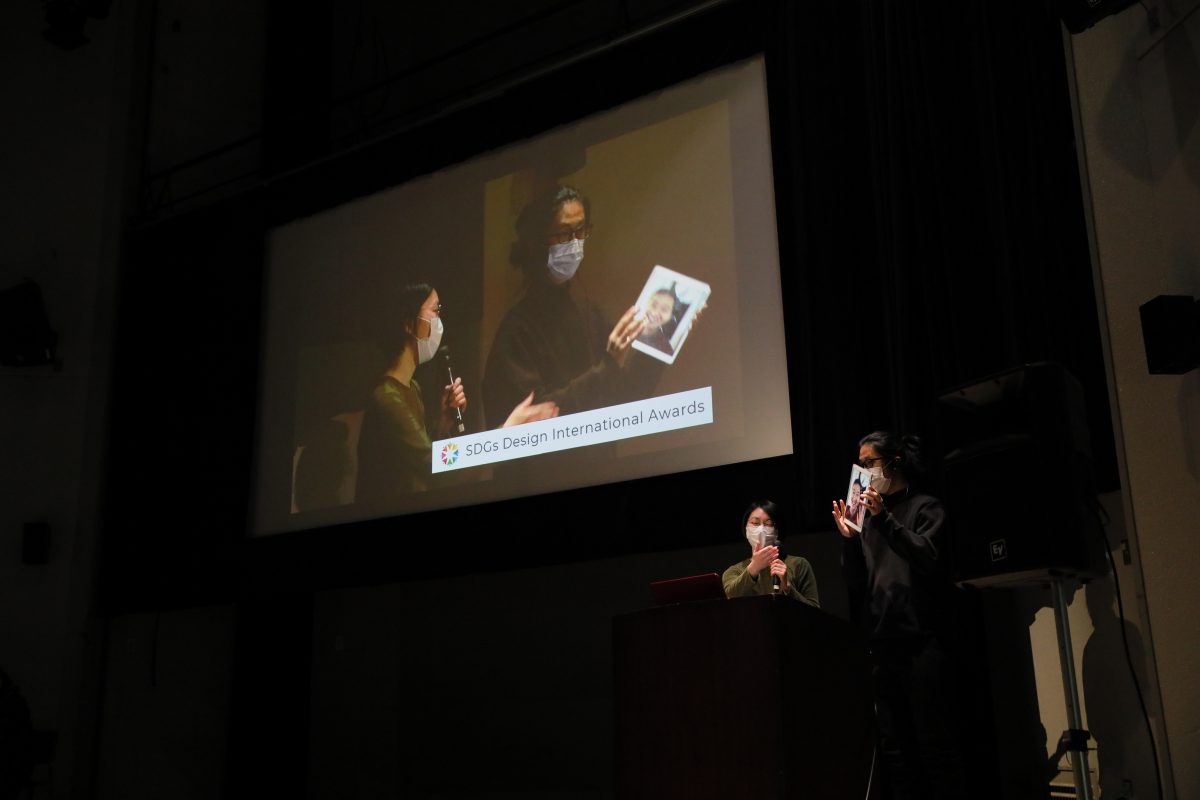 The “SDGs Design International Awards 2019” was held in 2019 by the Kyushu University, Faculty of Design’s SDGs Design Unit and Center for Designed Futures, inviting students from around the world to submit innovative ideas and designs addressing SDGs. On March 14th, 2020 (Saturday), the “SDGs Design International Awards 2019 Final Presentation and Award Ceremony” was held in the multi-purpose building at Kyushu University’s Ohashi Campus. The theme for this competition was “Changing the World through Design.” Students from around the world with interest in design were invited to submit their ideas on how to solve various issues. This competition served as an opportunity for the youth, the leaders of the next generation, to experience how the power of design can contribute to solving humanity’s social issues. Among the 223 submissions from 88 universities and 13 countries, five finalists were selected to present their proposals.

The award ceremony was supposed to take place on-site with presenters from all over the world and spectators. However, due to the widespread of COVID-19, only the presenters living in Japan and related parties attended in person. A live stream was set up connecting six locations simultaneously in four countries (Japan, China, Germany, and the United Kingdom) for presenters and judges residing outside of Japan to attend.

In coastal areas of China, land shortages have become a problem due to urbanization, industrialization, and population growth. The team came up with a design to tackle this problem on Niyu Island, Wenzhou City, Zhejiang Province, where reclamation of land has been ongoing for more than 20 years. The fishing industry was originally the main source of livelihood for people on Niyu Island. However, around the year 2000 onwards, traffic volume increased, and along with economic development, land reclamation began to flourish. As a result, frequent red tides have reduced the habitat of many benthic organisms, creating serious ecological problems. The team came up with the idea of using “seaweed” to solve this problem. The design involves using the existing seaweed cultivation technology used on Niyu Island to create a system to transplant floating seaweed masses (LIFI System) in order to fix the sea ecosystem, purify seawater, revive the intertidal zone (areas where submergence and exposure occur due to the rise and fall of the tides) and contribute to developing sustainable industries. This proposal follows the steps below:

In the presentation, the team discussed specifics regarding the materials and planning for the floating masses and the timeline for forming the intertidal zone. Ultimately, it is a design that promotes cooperative environmental, economic and social development by restoring water quality and the ecosystem, with the restoration of the fisheries and encouragement of rural tourism revitalizing sustainable economic activities.

This team worked together to tackle one of the goals of SDGs, “To eliminate inequalities of people and countries”. They aimed to take the first step towards an inclusive society by creating a mechanism that promotes conversation and understanding of people beyond nationality, viewpoint, and affiliation.

This project reminded me of the “mobile sauna car” that I experienced in Finland and the “footbaths” in Japan. One thing common among these two is that they are both “relaxing.” In addition to their physical healing properties, they are set up free of charge to the public. They can be used by people of all economic backgrounds, and allow people to feel the spiritual comfort of belonging to society through conversation. Based on these, the “Mobile Footbath” was designed by combining the advantages of the mobility of the mobile sauna, the casualness of the foot bath, and the fact that it makes no difference what your gender or religion is.

Regarding the design,
・It is compact so that it can be carried on the train or in the elevator
・It is the maximum size that will allow everyone in the footbath to be part of the same conversation
・ It allows for the line of sight of the people utilizing the footbath and the surrounding people to be at the same level
・It is made from a selection of sustainable and environmentally friendly materials
・It doesn’t require an explanation

The team tried to create a “design that encourages dialogue” by considering both hard and soft aspects.

The actual footbath event held in Helsinki, Finland, was reported on the news. During the event, a great variety of interactions took place regardless of statuses and affiliations. There were new students, international students, and students across various academic years gathered at the university. On the street corner, you can see Finns and immigrants taught each other the languages of their own countries. There were two people from two countries having conflicting views, trying to understand each other’s point of view, were featured on the news. Also, it was reported that a small group with different perspectives, unwound and interacted with each other around the mobile footbath.

Furthermore, it was mentioned that there is a possibility of future development by taking advantage of its portable nature, to warm up the body efficiently with a small amount of water, comforting the mood and fostering the sense of community in shelters and temporary housing after a natural disaster.

Ms. Reiß thought of “a mechanism to protect people who need help in the event of an accident or disaster.” Specifically, she came up with a design just for infants who are only able to rely on their parents. The design is based on the premise that it can be utilized on a daily basis since emergencies cannot be predicted. The “Baby Cocoon” is a tool that, as its name suggests, can hold an infant while protecting him/her in a cocoon-like shape.

Firstly, the ergonomic design allows for the baby to sit comfortably, parents to calm and hug the baby. Also, with the close physical contact, there is an added sense of security. The foldable hard-shell protects the baby’s head. Another important point is that the device attaches securely to the parent’s abdomen, allowing the parent to move both arms freely. There is also a pocket in the shell for storing important documents.

In terms of its uses, apart from usage in an emergency evacuation, it can be used as a bed for changing diapers and for the infant to sleep at evacuation centers. It is also possible to use it to breastfeed while maintaining privacy.

The material for the outer hard-shell portion is to be made with polystyrene, aluminum, carbon fiber, etc. The fabric to be made with polyamide because of its water and flame resistance. A lot of thought was put into the weight, and it was discussed that it would be manufactured in the range of 1 to 1.3 kg.

Ms. Reiß concluded her presentation by sharing that her inspiration for Baby Cocoon came from the “posture of a snug embrace” and that she designed it so that infants can feel safe and as if they are safely protected in the womb.

The Kyushu University, Graduate School of Design, Bangladesh survey team worked on the SDG of “eliminating inequality within people and countries.” While conducting a field survey at a Rohingya refugee camp in Bangladesh, they had noticed that there was an increasing number of conflicts between the refugees and locals. The team decided on a theme of creating “a tool for visualizing friendships that connects Rohingya refugees and locals”.

Local Bangladeshis and Rohingya refugees speak the same Bengali language and practice Islam. The team focused on the unique sense of friendship between Bengali-speaking people. Even if two people meet for the first time, as soon as they realize they have mutual acquaintances, they often open up to each other quickly. If they interact and build relationships from childhood, the team thought that it would be possible to prevent conflicts between the ethnic groups in the future.

The tool they designed was the “Tomo Connector.” Each name is written in Bengali on the plates connected by strings. These plates are connected through the awareness of mutual human relationships.

For example, “friend – friend of a friend – that person’s brother”. The way to use it is when you meet someone for the first time or when you get to know a friend of a friend, you exchange plates and connect the plate to your own string. By visualizing your friends while enjoying the fun of collecting the plates, you are able to identify common friends. By doing so, they aim to bring the distance between local children (who initially thought that their relationships were distant) and the Rohingya children closer. For this project, while creating an actual product, they have also designed an opportunity to avoid future conflicts between ethnic groups and to build a solid relationship.

The team worked on the project in Le Shan, an old fishing village in Fangcheng Port, Guangxi Province. This area has been plagued by typhoon damage, rising sea levels, and erosion of the quay due to waves. They thought of methods to protect the coastline while avoiding negative impacts on the ecosystem and environment.

The idea came from the Luoyang Bridge in Quanzhou. It was thought that the reason why it has not collapsed since the Northern Song Dynasty is that the attached oysters have increased the strength of the base of the bridge. Therefore, they decided to incorporate this ancient natural method. The idea was a “breakwater with a double structure consisting of a breakwater using oyster shells and an artificial reef using oyster rafts.” This allows the quay to be protected from wave erosion while still using traditional methods. The presentation considered specific oyster raft designs for several geographical conditions.

Also, by introducing oysters, carbon will become a permanent fixture in the sea, nutrients will be enriched, and water quality is expected to improve. It is expected that this will increase the variety of benthic organisms and increase biodiversity. Furthermore, the development of new industries through oyster farming will help solve the economic problems faced by the fishing villages.

The team wants to solve new issues ranging from the environment, disaster prevention, and the economy via methods that have been passed down from ancient China. They showed a panorama view of a future landscape when this project is realized, which demonstrated the concreteness of the proposal.

Finally, the final judging begun. The results are noted in the latter part of the article.

Prev The 12th Design Fundamental Seminar: What is a Designer? Principles of Design, Considered from the Angle of “Professionalism” Next SDGs Design International Awards 2019 "Final Presentation and Award Ceremony" Part 2
閉じる